Ron roared at .
hi guys. im changing faculty. im going to major in heavenly maths. next time you guys have any queries about the stars, moon or the sun, feel free to approach me. if you ever intend to go Beijing or Oslo to witness any astronomic phenomenon, ask me along. I 've been extremely inspired by the lectures which i have ATTENDED and will like to witness them myself. Oh, i forgot, Bona and Kenny are changing majors as well. Kenny changing to Marketing Major. Bona changing to the Gregorian Calendar Major. So... guess you guys know who to approach from now onwards when that damn calendar on your com malfunctions or if you need to buy food from the wet market.

this is what happens when you dun return to your room often.

Bai roared at .
have any of you guys wanted to get or do anything for our blk auntie?
bonanana roared at .

you're desperate if you hope knowledge diffuses into you


Wednesday, April 25, 2007
WHAT THE HELL IS WRONG WITH THE CHATBOX. SOMEONE FIX IT OR [insert your worst nightmare threat here]

random thoughts and comments...
oh man. forum not working, and it seems that the blog tagboard is abit wonky too. :( so sad.

anyway just a few random thoughts and comments of my own to add:

Bona = Nerd God. *bow* If I hug your leg like Buddha's, will I do better for exams?

Yuan Bin and Karen. Please. Time to buck up la. It's very very very difficult to be less nerdy than me, can? I really dunno how you guys manage to do it. *sigh* First year already liddat. When you're in your last year - HOW?! *shakes head*

So... who's going for clubbing/drinking on the 4th of May? Venue is set at St. James Power Station. RSVP asap so I can cheer up please. My last chiong session in hall already - give face la. :p

(Those names you don't recognise, they're Block A Alumnis - a group I'm going to be relegated to soon *sob*)

Man United edges past Milan
Swashbuckling Man United battles back in grand fashion to snatch a last gasp 3-2 victory in a thrilling champions league semifinal first leg at the Theater of Dreams early this morning. A scintillating Rooney double, his matchwinning second coming in the last minute of regulation time ensures man united are in pole position to qualify for the final in athens come May 23rd. They take a slender goal advantage going into the return leg at the daunting San Siro next wednesday. However, the 2 'away' goals conceded could yet prove costly. A 1-0 or 2-1 reversal would suffice to knock United out in what seems to be only their second semifinal appearance since the legendary treble winning '99 season. Yet United gaffer Sir Alex Ferguson will be more than pleased with this monumental feat. 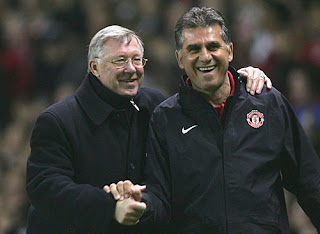 For United, there is only going to be one approach coming into this crucial game, that is to attack relentlessly to take as many goals to the return leg. The cautious tactics so often employed previously in Europe has to be abandoned. Not entirely due to the recent form of the team's attacking prowess, albeit a tempting reason since they did put 7 past Roma, but more apparent the defense is deprived off the injured first choice trio of skipper Neville, hardman Nemanja Vidic and classy Ferdinand. United's second stringers simply do not match up against the potent Milan's strike force. For O'Shea, Brown Heinze and Evra read Gilardino, Kaka, Seedorf, Pirlo. Playing a defensive, counterattacking game would be suicidal. To have any chance of getting a result against a full strength mighty Milan, going gung-ho was the order of the day.

Milan had enjoyed the better part in the early exchanges, as Kaka lived up to his pre-match billing as he proved too hot to handle for the makeshift united rearguard. With United unable to contain Milan's slick movement and passing abilities, the brilliant Brazilian exploited defensive blunders on two occasions to given Milan the lead coming into the interval, overcoming Ronaldo's early headed opener for united. He threatened to run riot, almost notching a third with a rasping drive well saved by van der Sar.

United started off the second half with an urgency to get back to level terms. Time and time again they were thwarted by the experienced Milan defense marshalled superbly by the rock solid Nesta. However, the game took a new complexion when the instrumental Milan destroyer cum midfield enforcer Gattuso limped off injured. The loss was a big blow as suddenly United began to find their rhythm, putting Milan on the back foot. The tide had turned United's way as they ran rings round Milan's players, at times seem to be toying with them. An equaliser was inevitable and it duly arrived in a moment of brilliance from Scholes' whose exquisite flick set up Rooney to slip the ball past Dida. 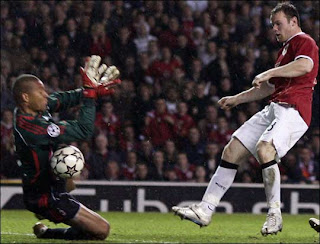 A galvanised United pressed on in search for the winner. Their buccaneering brand of football had Milan in disarray, Scholes and Carrick controlling the tempo as well as dictating play, Ronaldo and Giggs bamboozling both fullbacks, Rooney creating havoc upfront. A winner was on the cards and in true fairytale fashion, Rooney ran on to Giggs' slide rule pass after yet another blinding counter attack to nervelessly place the ball beyond Dida's grasp to send the home crowd into delirium, almost raising the roof in the process. 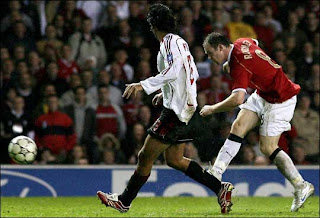 What a game. An enthralling match played out by arguably 2 of the best teams in Europe at the moment. Breathtaking at large with the finest players from both teams mesmerizing on the biggest stage of club football. The big names impressed, but one individual stood out from the rest ; 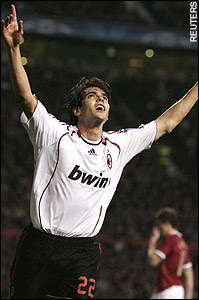 Perfect tonic for the grueling exam schedule. It was worth staying up for the game. In fact for any United game ;p
The author is an avid United fan, and reckons it will be Ronaldo's turn to upstage compatriot Rooney in the return leg.

exam stress
i am thinking how funny it is that everyone is fighting to see who is more nerd. i guess it must be due to the exam stress. you never know what ppl will be up to when they are stressed up by the few gigabytes of information.

i sort of gather some info about our own acers.
one of them is start stealing ppl's things.

ppl want to join contest so they can get free braces

ppl start eating grass instead of at uncle vincent.

save the nus studentS! stop setting papers that are so hard!!

sorry joshua. bow down to your new master little nerdies and nerdettes.

please hand up your nerdy index. =)

Seniors
Seems like the forum is spoilt...oh well just blog here instead...

hmm.....getting bored of studying....so decided to type a few posts of what i always tot of the seniors

gerrad: guy who can watch soccer on his com, cook self made marinated chicken


Sunday, April 22, 2007
and i want to thank all y'all that made the effort to celebrate my birthday. it's a shitty time and i appreciate everyone taking time out from their studies just for that little while. hope everyone does well! :)
bonanana roared at .
http://www.nerdtests.com/ft_loser.php

i propose taking this test instead lol


Saturday, April 21, 2007
i know its exam time...
... but to make sure there's something for all of us to look forward to (you know, as a motivation of sorts) we have to make plans for after the exams.

As such (ok i know everytime i post on this blog it has to do with clubbing but i'm really not that much of a chiongster-ress k) we're making plans to go drink and club!

Venue is unconfirmed, but we're looking at a few:
DblO - cheap drinks
St. James - to check out new place
Any other suggestions on where to go?

As the weeks draw near, just like to thank everyone for making blk a so fun. hehe..oh ya if u guys got anything to give the juniors before u leave, kindly indicate to us!!! so far we have aaron as the number 1 philanthropist!

I Love Block A No Matter What They Say

BE THERE for the free food!!! and more importantly ROOM ALLOCATION!!!

BEN and YEEEEEEEEEEEELIAAAAAAN will be explaining the room allocation and many more! take a break from your mugging and lets just get together!!!


Monday, April 16, 2007
woo hoo~
someone updated the template! thanks!
but what happened to the tag board =(
the slideshow rocks

Hey guys! Our hall's aca group, SHAG are in the finals of the talent competition, Stardust! It's going to be at 7th May, 7.30 PM at UCC! We have Nigel and Wenjia representing us from our block, in addition to Zhiqian and Daniel from block B, and Kane and Tiansheng from Blk C. Voting matters in this competition, that's why your presence matters! Do come down for it if you can, tickets cost $12, marked down from $15 while the offer period is still on! So do find me if you can, preferably by the end of the week!